You are here > About Us > Case Studies > Helma and Ron 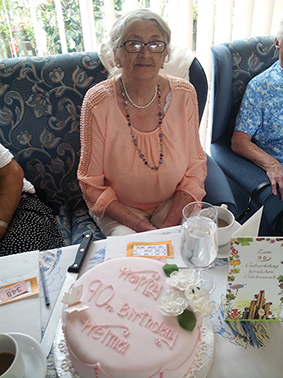 August 9th 2014 marked the 100 year anniverasry since the start of World War One.

While there are few survivors from the Great War, this historic occasion has certainly stirred some memories for some East Boro tenants who lived through the Second World War. One of those is German-born Helma Gilbert, who lives at Christophers. Here she tells her fascinating, courageous and often heart-breaking story.

BORN in Germany in August 1924, Wilhelma Kern’s future was already mapped out.

As the daughter of a farmer, it was always assumed she would end up working on the family farm. 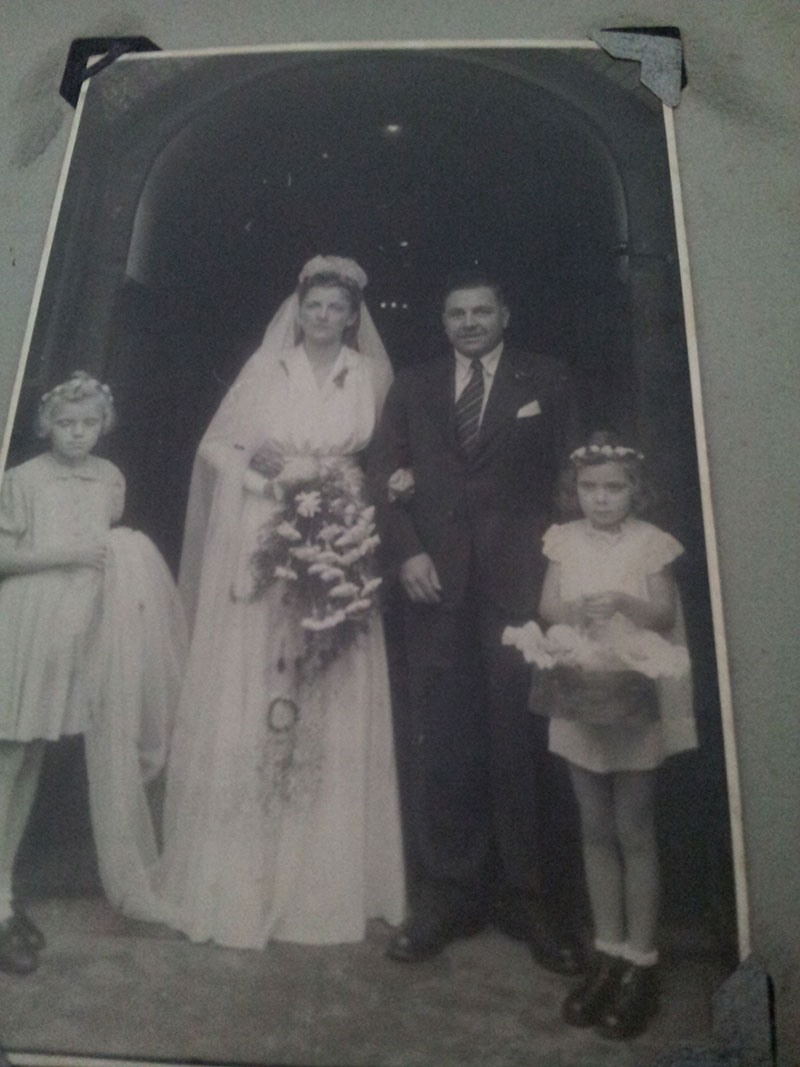 However, Helma - as she became known - had other ideas. She grew up wanting to be a nurse and after leaving school at 14, the teenager joined the Red Cross where she spent time volunteering with the German Navy.

Ultimately, Helma wanted to go to Russia and work but being under the age of 21, her father would not allow it. She remained in Germany although her life was turned upside down following the outbreak of World War Two in 1939. Helma’s home village was invaded and taken over by the Russians and so she and many of her neighbours were

evacuated on a German Navy ship which set sail for the relative safety of Denmark.

It was a heart-wrenching time for those involved. On the one hand they were escaping the terrors of war but on the other they were being forced to leave everything behind, including their loved ones. Little was Helma to know that when she waved her parents goodbye on that fateful day, it would be the last time she ever saw them.

Once in Denmark the hostilities towards them were so awful that they were soon sent back to Hamburg. Once there, Helma got news that her sister had survived the invasion on their village and was now also living in Hamburg.

After much searching, the siblings were finally reunited and they decided to set up home together. Once settled in the city and with the war recently ended, Helma started work as a nurse on the children’s ward of the Hamburg Hospital. 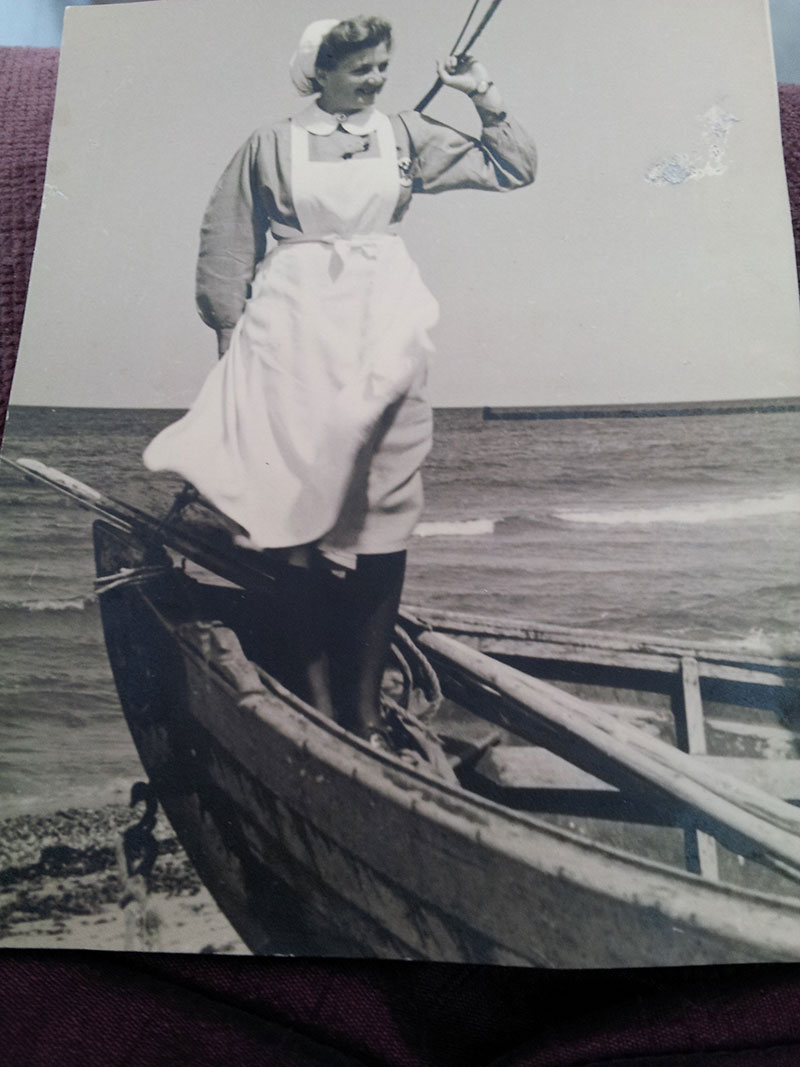 Following a shift one night, Helma returned home to the flat they shared to find her sister seriously ill. Worried about her condition, she contacted the hospital who said they would send a car and driver to collect them both.

The car quickly arrived, driven by an officer from the British Army, Regimental Sergeant Major Ronald (Ron) Gilbert. Little did she realise at the time, but the man at the wheel would one day become Helma’s husband. Helma’s sister made a full recovery and the pair continued to live happily together in their Hamburg flat.

Meanwhile Ron had taken quite a shine to Nurse Kern and began sending flowers and presents in the hope of her agreeing to a courtship.

Helma was attracted to the soldier too but a German nurse dating a British serviceman was completely unheard of and it came at heavy price. Once the hospital got wind of the relationship they asked Helma to leave her position, something she reluctantly did.

The couple soon fell in love and decided to marry. Unable to return to Helma’s home village due to the erection of the Berlin Wall, they wed in Hamburg on September 4, 1948 and decided to move to England to live. But getting permission to emigrate didn’t prove straight forward either with Helma having to obtain a copy of her parents’ birth and marriage certificates, which wasn’t the easiest of tasks.

She also had to write to the British Embassy stating that she was willingly marrying Ronald Gilbert. She still has the letter to this day. It reads: “I Wilhelma Kern met Mr Ronald Gilbert and over this period of time that I have known him I have always found him to be an honest and upright man .I am willing of my own free will to undergo a marriage with him.”

Eventually permission was granted and the newly weds headed for Taunton where they lived with Ron’s parents. Helma didn’t speak very much English at that time and so she would go to the picture house every day to watch movies and learn the language that way. After a couple of months, Ron’s parents gave the couple some money to get their own house. This they did in Wolverhampton as Ron had discharged himself from the Army and found work in the city.

Ron joined the Territorial Army and was almost immediately sent to serve in Egypt. Helma, expecting her first child at this time, moved back to Taunton to be with her in-laws. After giving birth to a baby girl, Helma travelled to join her husband in Egypt. But days after her arrival, the Suez Canal capture came about, with all British women and children put on a ship bound for England. Meanwhile the men were all captured and taken to prison.

Helma and daughter returned to Taunton, where she spent an agonising year not knowing whether Ron was dead or alive. But then on Christmas Eve 1949, there was a knock on her in-laws door and there on the step was her beloved husband. Following their emotional reunion, the Gilbert family headed to Ghana where Ron had secured employment. He did well in the African country and was highly respected and liked by the local tribes people. In fact he was so well thought of he was actually made a president of one of the tribes.

While there, Helma fell very ill after drinking dirty and contaminated water. On examination she was also found to be pregnant. Doctors advised an immediate return to England but tragically she lost the baby just after arriving back in Taunton.

Ron received the devastating news and quickly decided to return home to be with his wife and daughter. Once back in Taunton he found work as a safety officer inspecting cranes, but sadly he and Helma could not have any more children. The family stayed in Somerset until Ron’s retirement, after which they moved to Dorset to be close to their daughter who was now married and had children of her own. Helma never did go back to Germany and so never saw her family again. However, she lived happily and contentedly with Ron until his sad passing in 1997.

As I’m sure you will agree, Helma’s life has been nothing short of remarkable. Packed full of drama, excitement, fear, confusion, heartbreak, tragedy, but ultimately love.